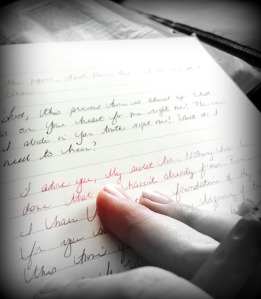 I was head-over-heels in love with Jesus. Totally and completely smitten by His love for me.

I was both enamored and befuddled at the same time. Was it truly possible that the Creator of the Universe desired to speak to me so intimately, and with such care and affection? It was admittedly messing with my own paradigm about how I viewed God. He was Someone to be respected and obeyed. Someone to Whom I would constantly repent on the “off chance” I was in sin and didn’t know it. I don’t think I knew how to accept such kindness from the Father. This was the beginning of my personal revelation about my identity; how I viewed myself in relationship to my Heavenly Father, and how I viewed Him as my Heavenly Father.

Amidst the turbulence of my life at that time, He took me away on a “honeymoon” with Him. I know – it sounds a bit strange, doesn’t it? Let me give you some background.

It was October; one month after I first heard Him speak to me (if you haven’t yet read Part I, you can read it here). I was still unemployed. Prior to losing my job, I had planned to go to California to attend the wedding of a dear friend I had known since grade school. I felt like I was meant to go on the trip even though I had limited financial resources. I was both excited and nervous. I was about to embark on a new adventure. It was also the first time I had ever traveled alone. Looking back, I see how God used it to build a foundational dependency on Him when there was no one else around to lean on. It was also a time in which I began to interactively journal with Him.

“Lord, do You want to tell me how long I will be unemployed?”

It was a simple journal entry, and one in which I didn’t give much thought at that time. I was learning how to be alone with Jesus. It was a time of exploration with Him. I would talk to Him and He would talk to me. It wasn’t fancy or super-spiritual, but it was deeply profound. Do you ever have crazy, melodramatic thoughts? I sometimes do! At one point on the trip, I remember getting on a bus, looking out the window and thinking, “Right now, there is no one in the world who knows exactly where I am at this particular moment, except God.” The thought made me giddy. It was just Him and me. It was my honeymoon away with Him. I had begun to see Him as my Best Friend and First Love.

I also learned what it meant to partner with Him in prayer. I remember visiting the elementary school I attended in first through third grade. What started out as a sentimental, nostalgic visit ended up being a time of intense spiritual warfare as I stood in the middle of the school’s field, singing and praying in the Spirit while warring against the darkness I both sensed and saw. With the Holy Spirit’s guidance, I saw His power visibly break through as we took back that territory for the Kingdom of God. I will never forget that day because it tangibly taught me about the importance of hearing His voice during warfare, about my authority in Christ, and of the power we have through His Son, Jesus.

So, why do I share this with you? Because this is the kind of relationship God desires to have with each one of us. It’s intimate, it’s personal, and it’s intentional. And because I find it incredibly encouraging that God can do amazing things with a heart that is willing to know Him more.

Years later, I’m still in awestruck wonder when He speaks to me with phrases such as, “My beautiful bride,” My precious child,” or “I adore you, My sweet love.”

Oh. Remember my earlier question to the Lord about how long I’d be unemployed?

It was exactly nine months. To the day.